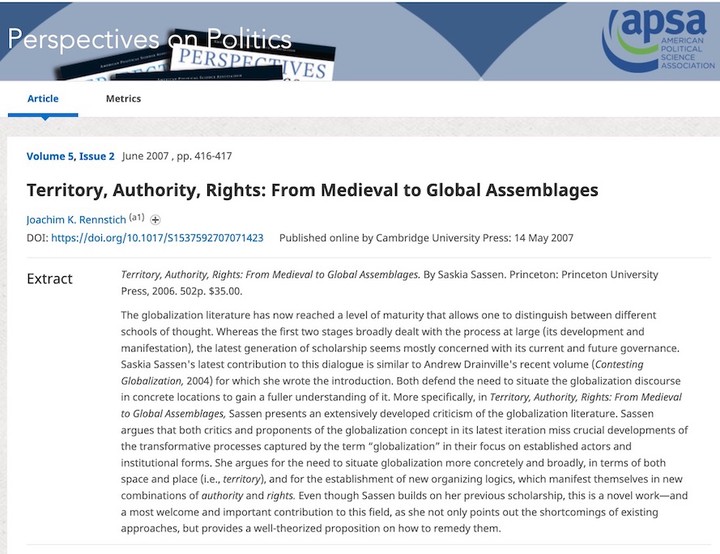 The globalization literature has now reached a level of maturity that allows one to distinguish between different schools of thought. Whereas the first two stages broadly dealt with the process at large (its development and manifestation), the latest generation of scholarship seems mostly concerned with its current and future governance. Saskia Sassen’s latest contribution to this dialogue is similar to Andrew Drainville’s recent volume (Contesting Globalization, 2004) for which she wrote the introduction. Both defend the need to situate the globalization discourse in concrete locations to gain a fuller understanding of it. More specifically, in Territory, Authority, Rights: From Medieval to Global Assemblages, Sassen presents an extensively developed criticism of the globalization literature. Sassen argues that both critics and proponents of the globalization concept in its latest iteration miss crucial developments of the transformative processes captured by the term ‘globalization’ in their focus on established actors and institutional forms. She argues for the need to situate globalization more concretely and broadly, in terms of both space and place (i.e., territory), and for the establishment of new organizing logics, which manifest themselves in new combinations of authority and rights. Even though Sassen builds on her previous scholarship, this is a novel work—and a most welcome and important contribution to this field, as she not only points out the shortcomings of existing approaches, but provides a well-theorized proposition on how to remedy them.